I’m not here to make unfounded claims about strength in housing.  Indeed, there’s no getting around the fact that both Existing and New Home Sales were lower month-over-month and below the median forecast in both cases.  I’d simply like to put this weakness in context.

When it comes to home sales data or any other economic data, it would be tremendously unlikely to see a series of “stronger than expected” results without a periodic pull-back.  We’ve been looking forward to a healthy run of stronger results since February (see the Feb 15th Newsletter that laid this out HERE).

If we understand and accept that resilience and improvement rarely occur in a straight line, everything has proceeded largely as expected.  As the chart in that previous newsletter suggested, the subsequent home sales data has been much stronger.  In fact, with respect to Existing Home Sales specifically, February’s numbers were arguably too hot compared to January’s.  The two reports since then (with April’s numbers being released this week), have been right in line with a very comfortable and familiar 5.2 million unit annual pace. 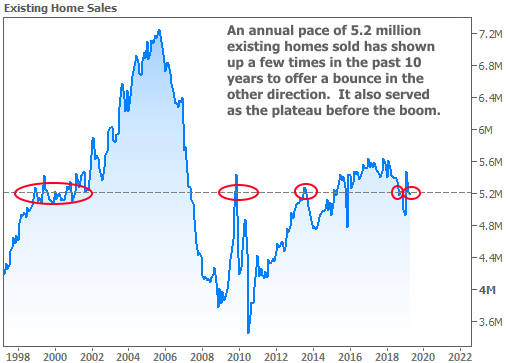 The counterpoints available to us in discussing New Home Sales are even more definitive.  While it’s true that New Home Sales “unexpectedly fell” this week, it’s important to notice where they fell FROM.  Last month’s reading was the highest of the post-crisis housing recovery.  Perhaps just as telling is the fact that this week’s reading was the 3rd highest in the same time frame. 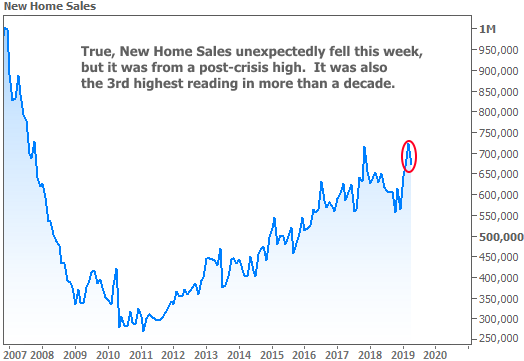 Long story short: housing metrics may have been weaker this week, but they’re much stronger than they were several months ago, and in relatively strong territory in the bigger picture.

Beyond the sales numbers themselves, other housing-related indicators help build perspective.  Among those indicators, mortgage rates stood out this week due to their drop to the lowest levels in well over a year (this depends on the lender as some were not quite back to late March lows while others were lower).

The drop in rates came courtesy of several developments that promoted risk-aversion in financial markets.  In general, risk-aversion can be seen when investors are selling riskier assets like stocks and buying safer haven assets like bonds.  Bond buying, in turn, pushes interest rates lower.

One of this week’s standout narratives was that of political upheaval in The UK.  Prime Minister Theresa May made a risky decision to broach the topic of reopening the Brexit referendum (pending certain prerequisites) in an attempt to gain support for her compromise plan.  It backfired tremendously with the consequence being her resignation, effective June 7th.

British politics don’t directly dictate US financial market trading levels.  On the other hand, London is one of the world’s largest and most important financial centers.  The UK is also a critical trading partner of the EU.  Together, their economies have an important impact on the global economy–big enough that uncertainty in The UK has global financial implications.  Markets can’t be certain of those implications, but traders have to do something to account for them.  This week, that took the shape of risk-aversion. 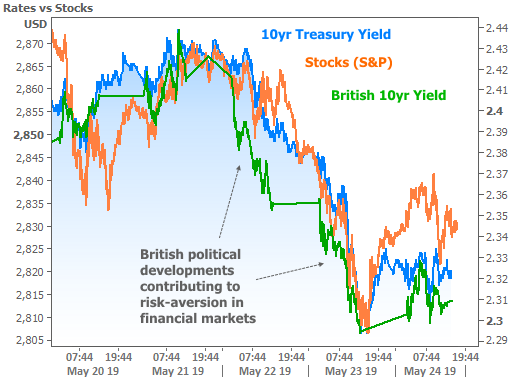 Risk aversion was also buoyed by ongoing trade war fears and weak domestic economic data.  With a 3-day weekend ahead and a light calendar of scheduled data next week, we’re likely waiting until the first week of June before seeing just how willing markets are to react to a full slate of economic reports.

Of course, the results of those economic reports will be important, but even then, some caution is warranted simply because the longer-term rally in rates is big enough that we might worry about its longevity.  The following chart shows the biggest rally trends in 10yr Treasury yields (a proxy for movement in longer-term rates like mortgages).  At no point in the past 4 years have we seen a move as big as the current trend.  That’s not to say it couldn’t get even bigger–simply that we should be ready to observe and react to any potential signs of a shift. 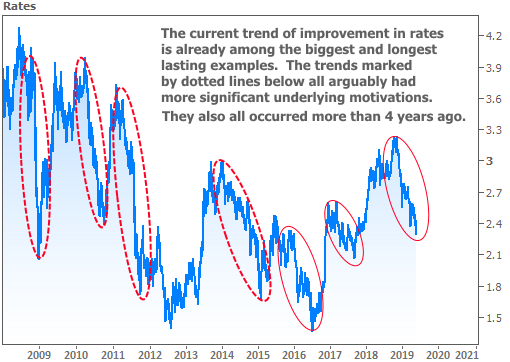 Why Aren’t Mortgages Falling as Fast as Other Rates?